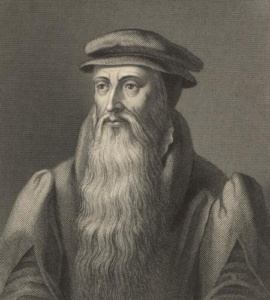 John Knox is considered to be the greatest Reformer in the history of Scotland. The exact place and date of his birth is not known with certainty, but it is generally accepted to be Giffordgate, 16 miles east of Edinburgh, in 1513 to 1514. Knox dies at Edinburgh on November 24, 1572. His father was William Knox, who fought at the Battle of Flodden, and his mother was an educated woman named Sinclair. John Knox is the author of “The History of the Reformation in Scotland”, and Knox was also a key contributor to the publication of the “Bible of the Protestant Reformation”, the 1560 Geneva Bible.

The Early Years of John Knox

The name “John Knox” is first recorded among the records of the University of Glasgow, where Knox enrolled in 1522. There, he is stated to have studied under John Major, one of the greatest scholars of his time. Major was at Glasgow in 1522 and at St. Andrews in 1531. How long John Knox remained at college is uncertain. He was ordained to the priesthood at some date prior to 1540, when his status as a priest is first mentioned.

John Knox first publicly professed the Protestant faith about the end of 1545. His mind had in all probability been directed to that faith for some time before the change was avowed. The immediate instrument of his actual conversion was probably George Wishart, who, after a period of banishment, returned to his native country in 1544, to perish, within two years, at the stake, as the last and most illustrious of the victims of Cardinal Beaton. Among other places where he preached the Reformed doctrines Wishart had come to East Lothian in Dec., 1545, and there he made Knox’s acquaintance.

John Knox was first called to the Protestant ministry at St. Andrews, which was throughout his life intimately associated with the Reformer’s career. There appears to have been no regular ordination. Of course, he had been already ordained as a priest in the Church of Rome. A detailed account of the whole proceedings connected with his call to the ministry, together with a report of the first sermon he delivered in St. Andrews, will be found in Konx’s most famous book, “The History of the Reformation in Scotland”.

Knox’s Confinement in the French Galleys.

While residing in the castle of St.Andrews, a stronghold and place of refuge for many Protestants, in July of 1547, the castle was seized by outside forces and John Knox became a French galley-slave for nineteen months. There he experienced hardships and miseries which are said to have permanently injured his health.

On his release, which took place early in 1549, through the intervention, apparently, of the English government, Knox found that in the existing state of the country, he could be of little use in his beloved Scotland. For nearly ten years, he submitted to voluntary exile, like many of the worthiest of his countrymen in those troublous times. All these years, however, he devoted himself to ministerial labors in connection with the Reformed Church. His duty was provided for him in England, for the space of about five years as a minister of the English Church.

The Travels of John Knox

From England, after the death of Edward, Knox proceeded to the continent, traveling for a time from place to place in some uncertainty. In Sept. 1554, while living at Geneva, he accepted in accordance with Calvin’s counsel a call to the English Church at Frankfurt. Here controversies in connection with vestments, ceremonies, and the use of the English prayer-book met him He later returned to Geneva, where he was invited to become minister of the refugee English congregation. In August of 1555, Knox set out for Scotland, where he remained for nine months preaching Evangelical doctrine in various parts of the country, and persuading those who favored the Reformation to cease from attendance at mass, and to join with himself in the celebration of the Lord’s Supper according to a Reformed ritual.

In May, 1556, he was cited to appear before the hierarchy in Edinburgh, and he boldly responded to the summons; but the bishops found it expedient not to proceed with the trial. In July an urgent call from his congregation at Geneva, along, probably, with the desire to prevent the renewal of persecution in Scotland, caused him to resume his Genevan ministry. His marriage to Marjorie Bowes, daughter of Richard Bowes, captain of Norham Castle, had meanwhile taken place, and his wife along with her mother accompanied him to Geneva, where they arrived in September.

The church in which he preached there (called the Eglise de Notre Dame la Neuve) had been granted, at Calvin’s solicitation, for the use of the English and Italian congregations by the municipal authorities. Knox’s life in Geneva was busy. In addition to preaching and clerical work he added a large correspondence; and he was constantly engaged in literary work. His publications at Geneva included his First Blast Against the Monstrous Rule of Women; and his long and elaborate treatise on predestination published 1560 was composed in Geneva.

Knox’s “History of the Reformation in Scotland”

Knox’s life from the time of his return to Scotland in 1559 is a part of the history of his country. When the Reformed Protestant religion was formally ratified by law in Scotland in 1560 he was appointed minister of the Church of St. Giles, then the main church of Edinburgh. He was at this time in the fullness of his powers, as is manifest abundantly in the style of his “History of the Reformation”, a work which appears to have been begun about 1559, and completed in the course of the next six or seven years. Knox’s “History”, if sometimes rough and even coarse in language, is written with a force and vigor not surpassed by any of his other writings, of all which it may be said that whatever their faults, they are works of true genius, and well worthy in their character of the great leader and statesman who wrote them.

At the very beginning of his labors as minister of Edinburgh, John Knox had the misfortune to lose his much-loved and helpful young wife. She left two sons, one of whom, Nathanael, died at Cambridge in 1580; the other, Eleazer, became vicar of Clacton Magna in the archdeaconry of Colchester and died in 1591. In 1564 Knox made a second marriage, which was greatly talked of at the time because the bride was remotely connected with the royal family. Even more so, the marriage receive much attention because John Knox was 50, while she was a maiden of seventeen! The young lady was Margaret Stewart, daughter of Andrew, Lord Stewart of Ochiltree. She bore Knox three daughters, of whom the youngest, Elizabeth, became the wife of the famous John Welsh, minister of Ayr.

At this time the Reformer lived a very laborious life. Knox was much engrossed with the public affairs of the national Church, and at the same time devoted to his work as a parish minister, to say nothing of his continual, and perhaps, in his position, unavoidable controversies, more or less personal, with the ecclesiastical and political factions of the day, which he regarded as his country’s enemies. He was, however, not without social and family enjoyments and he had a good house, which was provided and kept in repair by the municipality. Another house in Edinburgh, still preserved with little change and known since the eighteenth century at latest as “John Knox’s house,” may have been occupied by him toward the close of his life. Knox lived in kindly relations with his neighbors, many of whom, in every rank, were among his close friends.

The Death of John Knox

A higher testimony to the worth of a man not without faults was pronounced at his grave in the churchyard of St. Giles by the Earl of Mortoun, the regent of Scotland, in the presence of an immense funeral procession, who had followed the body to its last resting-place: “Here lyeth a man who in his life never feared the face of man, who hath been often threatened with dagger, but yet hath ended his dayes in peace and honour.”