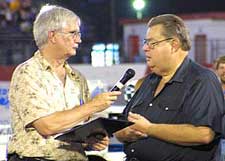 Jonathan Byrd Racing has been one of the most successful racing teams in the Indy Racing League since 1982, and has recently branched into stock-car racing as well. Our drivers have included such celebrity racing legends as Darrell Waltrip, John Andretti, and Arie Luyendyk. Team owner, Dr. Jonathan Byrd, was the 2002 pick for the Indianapolis Speedrome Hall of Fame, as shown in this photo, where he is receiving the plaque.

Jonathan Byrd’s Indy car is red-and-white, and its main sponsors include Jonathan Byrd’s Cafeteria, Vision Air Private Jets, and Bryant Heating & Air. Jonathan Byrd’s Rare Books & Bibles at GREATSITE.COM has also received media attention due to Jonathan’s two decades of involvement in car racing. Jonathan was the first team owner in the history of the sport to refuse any advertising sponsorships from alcohol and tobacco companies… a policy that has since inspired other team owners to do the same.