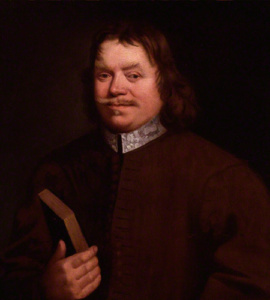 John Bunyan (November 30, 1628 – August 31, 1688), was the most famous of the Puritan writers and preachers. He was born at Harrowden (1 mile south-east of Bedford), in the Parish of Elstow, England. He is most well-known for his book “The Pilgrim’s Progress”, one of the most printed books in history, which he composed while in prison for the crime of preaching the Gospel without a license.

John Bunyan had very little schooling. He followed his father in the tinker’s trade, and he served in the parliamentary army from1644 to 1647). Bunyan married in 1649 and lived in Elstow until 1655, when his wife died. He then moved to Bedford, and married again in 1659. John Bunyan was received into the Baptist church in Bedford by immersion in 1653.

In 1655, Bunyan became a deacon and began preaching, with marked success from the start. In 1658 he was indicted for preaching without a license. The authorities were fairly tolerant of him for a while, and he did not suffer imprisonment until November of 1660, when he was taken to the county jail in Silver Street, Bedford, and there confined (with the exception of a few weeks in 1666) for 12 years until January 1672. Bunyan afterward became pastor of the Bedford church. In March of 1675 he was again imprisoned for preaching publicly without a license, this time being held in the Bedford town jail. In just six months this time he was freed, (no doubt the authorities were growing weary of providing Bunyan with free shelter and food) and he was not bothered again by the authorities.

Herein is a great controversy. As John Bunyan was married with children to support, and he could have walked out of the jail a free man at any time if he simply promised to stop preaching publicly without a license, one must ask if he really did the right thing. He was not asked to deny Christ or to recant his faith as the Protestant martyrs of a century earlier were. Indeed, many of those around him were openly Christians who shared his faith. Bunyan was simply asked to stop preaching without a license, or to move on. Should Bunyan have simply agreed and walked out of the jail and gone home to fulfill his duties before God as a husband and father? Or did he do the right thing in making those duties secondary to his personal conviction that he should be allowed to preach in that city without a license? Bunyan was not a martyr, nor was he ever violently persecuted, but his convictions, whether admirable or misplaced, were quite strong and vexed the local authorities who viewed him more as a troublemaker than any real threat.

On a trip to London, John Bunyan caught a severe cold, and he died at the house of a friend at Snow Hill on August 31, 1688. His grave lies in the cemetery at Bunhill Fields in London.

John Bunyan wrote The Pilgrim’s Progress in two parts, of which the first appeared at London in 1678, which he had begun during his imprisonment in 1676. The second part appeared in 1684. The earliest edition in which the two parts were combined in one volume came out in 1728. A third part falsely attributed to Bunyan appeared in 1693. “The Pilgrim’s Progress” is the most successful allegory ever written, and like the Bible has been extensively translated into other languages. Protestant missionaries commonly translated it as the first thing after the Bible. It is said that in the days of westward expansion in the United States, early settlers often owned only two books, one being the Bible, and the other being John Bunyan’s Pilgrim’s Progress.

John Bunyan wrote many other books, including one which discussed his inner life and reveals his preparation for his appointed work is “Grace Abounding to the Chief of Sinners” (1666). Bunyan became a popular preacher as well as a very voluminous author, though most of his works consist of expanded sermons. In theology he was a Puritan, but not a partisan. He was no scholar, except of the English Bible, but that he knew thoroughly. He also drew much influence from Martin Luther’s “Commentary on the Epistle to the Galatians”.

Some time before his final release from prison Bunyan became involved in a controversy with two theologians of his day: Kiffin and Paul. In 1673 he published his Differences in Judgement about Water-Baptism no Bar to Communion, in which he took the ground that “the Church of Christ hath not warrant to keep out of the communion the Christian that is discovered to be a visible saint of the word, the Christian that walketh according to his own light with God.” While he agreed as a Baptist that water baptism was God’s ordinance, he refused to make “an idol of it,” and he disagreed with those who would dis-fellowship from Christians who did not adhere to water baptism.

Kiffin and Paul published a rejoinder in Serious Reflections (London, 1673), in which they set forth the argument in favor of the restriction of the Lord’s Supper to baptized believers. The controversy resulted in the Particular (Calvinistic) Baptists leaving the question of communion with the unbaptized open. Bunyan’s church permitted pedobaptists (those who baptize children, such as the Calvinistic Presbyterian Church) to fellowship and eventually, Bunyan’s church even became a pedobaptist church.