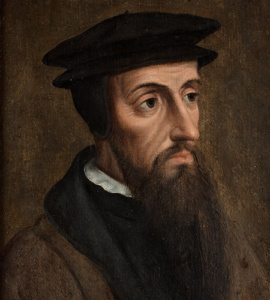 John Calvin is the author of the most famous theological book ever published, Calvin’s Institutes of the Christian Religion. He is considered, along with Martin Luther, to be among the most significant of figures in the Protestant Reformation. His doctrines of the sovereignty of God in predestining the fate of all believers, referred to today as “Calvinism”, are among the most hotly debated in Christianity. He is also the primary person behind the printing of the famous Geneva Bible.

John Calvin was born “John Cauvin” on July 10, 1509 at Noyon in France. His father, Gerard Cauvin was a church leader holding ecclesiastical offices for the lordship of Noyon. Calvin’s mother was Jeanne le Franc, the daughter of an innkeeper at Cambrai, who afterwards came to reside at Noyon. Gerard Cauvin was esteemed as a man of considerable wisdom and prudence, and his wife was said to be that rare combination of both a godly and attractive lady. She bore him five sons, of whom John was the second. John Calvin lived to the age of 55, dying on May 27, 1564.

The Early Years of John Calvin

John Calvin’s father destined him from the start for an ecclesiastical career, and paid for his education in the household of the noble family of Hangest de Montmor. In May 1521 he was appointed to a chaplaincy in the cathedral of Noyon. The plague having visited Noyon, the young Hangests were sent to Paris in August 1523, and Calvin accompanied them. He lived with his uncle and attended as an out-student the College de la Marche. From the College de la Marche he moved to the College de Montaigu, where the atmosphere was more ecclesiastical and where he had for instructor a Spaniard who is described as a man of learning and to whom Calvin was indebted for some sound training in dialectics and the scholastic philosophy. John Calvin speedily outstripped all his competitors in grammatical studies, and by his skill and acumen as a student of philosophy, and debate. Although not yet ordained, Calvin preached several sermons to the people.

A Change of Career for John Calvin

After some time, Calvin changed his mind about becoming a priest. He had fallen out of favor with the cathedral chapter at Noyon. On the advice of his relative, Pierre Robert Olivétan, the first translator of the Bible into French, Calvin began to study the Scriptures and to dissent from the Roman Catholic worship.

Calvin agreed with his father’s suggestion to move from Paris to Orleans in March of 1528, and change his career to a study of law under Pierre Taisan de L’toile, the most distinguished lawyer of his day. Calvin’s progress in the study of law was quick, and he was soon and frequently called upon to lecture, in the absence of one or other of the regular teaching staff at his law school. Other studies, however, besides those of law occupied him while in this city, and moved by the humanistic spirit of the age he eagerly developed his classical knowledge.

From Orleans, Calvin went to Bourges in the autumn of 1529 to continue his studies under the brilliant Italian, Andrea Alciati (1492—1550), whom Francis I. had invited into France and settled as a professor of law in that university. There, by his friend Wolmar, Calvin was taught Greek, and introduced to the study of the New Testament in the original language, a service which Calvin gratefully acknowledges in one of his printed works. The conversations of Wolmar may also have been of use to him in. his consideration of the doctrines of the Reformation, which were now beginning widely diffused through France.

The year 1534 was decisive for Calvin. From this time forward his influence became supreme, and all who had accepted the Reformed doctrines in France turned to him for counsel and instruction, attracted not only by his power as a teacher, but still more, perhaps because they saw in him so full a development of the Christian life according to the evangelical model. Calvin moved to Basel, Switzerland, where he was welcomed by the band of scholars and theologians who had conspired to make that city the Athens of Switzerland. There Calvin now gave himself to the study of Hebrew. When Calvin was 28, he moved again, to Geneva. Switzerland, and he stayed in Geneva, with the exception of a brief trip, for the rest of his life.

Deeply convinced of the importance of education for the young, Calvin and his associates were established schools throughout Geneva, and to enforce on parents the sending of their children to them; and as he had no faith in education apart from religious training, he drew up a catechism of Christian doctrine which the children had to learn while they were receiving secular instruction.

While staying for a while in Strassburg , Calvin met and married, in August 1540, Idelette de Bure, the widow of Jean Stordeur of Liege, whom Calvin had converted from Anabaptism. In her Calvin found, to use his own words, “the excellent companion of his life,” a “precious help to him amid his manifold labours and frequent infirmities.” She died in 1549, to the great grief of her husband, who never ceased to mourn her loss. Their only child Jacques, born on the 28th of July 1542, lived only a few days.

The Last Years of John Calvin

In his later years, Calvin was afflicted with fever, asthma, and gout. In the early part of the year 1564 his sufferings became so severe that it was manifest his earthly career was rapidly drawing to a close. On. the 6th of February, 1564 John Calvin preached his last sermon, having with great difficulty found breath enough to carry him through it. He was several times after this carried to church, but never again was able to take any part in the service. He refused to receive his stipend, now that he was no longer able to discharge the duties of his office. In the midst of his sufferings, however, his zeal and energy kept him in continual occupation, as he commented, “Would you that the Lord should find me idle when He comes?” Calvin had many acquaintances but few close friends. His private character was in harmony with his public reputation and position. If somewhat severe and irritable, he was at the same time scrupulously just, truthful, and steadfast; he never deserted a friend. On the 25th of April, 1564, Calvin made his will. He spent much time in prayer and died quietly, in the arms of his faithful friend Theodore Beza, on the evening of the 27th of May 1564, in the fifty-fifth year of his age. The next day he was buried without pomp in the common cemetery.

With the possible exception of Martin Luther, no man has had a greater impact on the theology of the Protestant Churches today than John Calvin. While it is not possible to condense countless volumes of Biblical commentary of John Calvin down to a short summary, it is true that Calvin’s most well-know teachings, set forth in his Magnum Opus, “The Institution of Christian Religion” are the often-quoted “Five Points of Calvinism”. A common acronym used to help remember them is “T.U.L.I.P.” They are:

Total Depravity of Man: That man’s nature is basically evil, not basically good. Apart from the direct influence of God, man will never truly seek God or God’s will, though he may seek the benefits of association with God.

Unconditional Election: That God sovereignly chooses or “elects” His children from before the foundation of time. God does not “look down the corridors of time to see what decision people will make”… rather, God causes them to make the decision to seek Him.

Limited Atonement: That the death and resurrection of Christ is a substitutionary payment for the sins of only those who are God’s elect children… not the entire world.

Irresistible Grace: That when God calls a person, His call cannot ultimately be ignored.

Perseverance of the Saints: That it is not possible for one to “lose his salvation”.