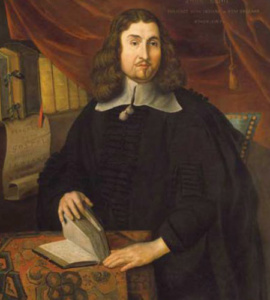 The first Bible printed in America was done in the native Algonquin Indian Language by John Eliot in 1663; nearly 120 years before the first English language Bible was printed in America by Robert Aitken in 1782. Eliot’s devotion to ministry to America’s natives earned him the title “Apostle to the Indians”. U.S. President Thomas Jefferson also recognized the native American “Indians” as among the most challenging of converts, when he published “The Morals of Jesus”, featuring the Parables of Jesus in one abridged volume.

John Eliot (1604—1690), American colonial clergyman, was born probably at Widford, Hertfordshire, England, where he was baptized on the 5th of August 1604. He was the son of Bennett Eliot, a middleclass farmer. Little is known of his boyhood and early manhood except that he took a B.A. Degree at Jesus College, Cambridge, in 1622. It seems probable that he entered the ministry of the Established Church, but there is nothing definitely known of him until 1629—1630, when he became an assistant at the school of the Rev. Thomas Hooker, at Little Baddow, near Chelmsford. The influence of Hooker apparently determined Eliot to become a Puritan, but his connection with the school ceased in 1630, when persecutions drove Hooker into exile. The realization of the difficulties in the way of a nonconforming clergyman in England undoubtedly convinced John Eliot to emigrate to America in the autumn of 1631, where he settled first at Boston, assisting for a time at the First Church.

In November 1632, John Eliot became a teacher at the church of Roxbury, with which his connection lasted until his death. There he married Hannah Mulford, who had been betrothed to him in England, and who became his constant helper. Soon, Eliot became inspired with the idea of converting the Indians. His first step was to learn their dialects, which he did by the assistance of a young Indian whom he received into his home. With his aid he translated the Ten Commandments and the Lord’s Prayer. John Eliot first successfully preached to the Indians in their own tongue at Newton in October 1646. At the third meeting several Indians declared themselves converted, and were soon followed by many others.

John Eliot induced the Massachusetts General Court to set aside land for their residence. The Court did so, and also directed that two clergymen be annually elected by the clergy as preachers to the Indians. As soon as the success of Eliot’s endeavors became known, the necessary funds flowed in upon him from private sources in both Old and New England. In July 1649 parliament incorporated the “ Society for the Propagation of the Gospel in New England,” which supported and directed the work inaugurated by John Eliot. In 1651 the Christian Indian town founded by Eliot was removed from Nonantum to Natick, where residences, a meeting-house, and a school-house were erected, and where Eliot preached, when able, once in every two weeks as long as he lived.

John Eliot’s missionary labors encouraged others to follow in his footsteps. A second town under his direction was established at Ponkapog (Stoughton) in 1654. His success was duplicated again in Martha’s Vineyard and Nantucket, and by 1674 the unofficial census of the “praying Indians” numbered 4,000. At Eliot’s death, which occurred at Roxbury on the 21st of May 1690, the missions were at the height of their prosperity.

Even wider in influence and more lasting in value than his personal labors as a missionary, was Eliot’s work as a translator of the Bible and various religious works into the Massachusetts dialect of the Algonquian language. The first work completed was the Catechism, published in 1653 at Cambridge, Massachusetts, the first book to be printed in the Indian tongue. Several years elapsed before Eliot completed his task of translating the Bible. The New Testament was at last issued in 1661, and the Old Testament followed in 1663. The New Testament was bound with it, and thus the whole Bible was completed. To it were added a Catechism and a metrical version of the Psalms. This book was printed in 1663 at Cambridge, Mass., by Samuel Green and Marmaduke Johnson, and was the first Bible printed in America. In 1685 appeared a second edition, in the preparation of which Eliot was assisted by the Rev. John Cotton (1640—1699), of Plymouth, who also had a wide knowledge of the Indian tongue.

Many people are shocked to discover that the first Bible printed in America was not English… or any other European language. In fact, English and European language Bibles would not be printed in America until a century later! Eliot’s Bible did much more than bring the Gospel to the pagan natives who were worshiping creation rather than the Creator… it gave them literacy, as they did not have a written language of their own until this Bible was printed for them. The main reason why there were no English language Bibles printed in America until the late 1700’s, is because they were more cheaply and easily imported from England up until the embargo of the Revolutionary War.

But the kind of Bible John Eliot needed for his missionary outreach to the native American “Indians” was certainly not to be found in England, or anywhere else. It had to be created on the spot. Eliot recognized that one of the main reasons why the native Americans were considered “primitive” by European settlers, is that they did not have a written alphabet of their own. They communicated almost exclusively through spoken language, and what little writing they did was in very limited pictorial images, more like Egyptian hieroglyphics than that of any functional alphabetical language like those of Europe or Asia or Africa.

Eliot Offers the Gift of Literacy

Clearly the Word of God was something these people needed if they were to stop worshiping creation and false gods, and learn to worship the true Creator… but God’s Word could not realistically be translated effectively into their primitive pictorial drawings. So Eliot found a wonderful solution: he would give the native Americans the gift of God’s Word and also give them the gift of true literacy. He agreed to learn their spoken language, and they agreed to learn the Western world’s phonetic alphabet (how to pronounce words made up of character symbols like A, B, C, D, E, etc.) Eliot then translated the Bible into their native Algonquin tongue, phonetically using our alphabet! This way, the natives did not really even need to learn how to speak English, and they could still have a Bible that they could READ. In fact, they could go on to use their newly learned alphabet to write other books of their own, if they so desired, and build their culture as the other nations of the world had done. What a wonderful gift!

Other Literary Works of John Eliot

Besides his Bible, John Eliot published at Cambridge in 1664 a translation of Baxter’s Call to the Unconverted. With the assistance of his sons he completed (1664) his well-known Indian Grammar Begun, printed at Cambridge, Massachusetts, in 1666. The Indian Primer, comprising an exposition of the Lord’s Prayer and a translation of the Larger Catechism, was published at Cambridge in 1669. In 1671 Eliot printed in English a little volume entitled Indian Dialogues, followed in 1672 by his Logick Primer, both of which were intended for the instruction of the Indians in English. His last translation was Thomas Shepard’s Sincere Convert, completed and published by Grindal Rawson in 1689.

John Eliot’s literary activity, however, extended into other fields than that of Indian instruction. He was, with Richard Mather, one of the editors of the Bay Psalm Book of1640, which was the first book of any kind ever printed in America.