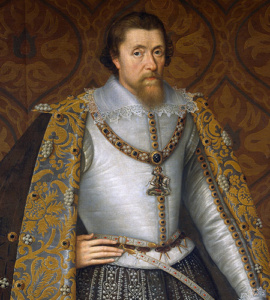 With the death of Queen Elizabeth I, Prince James VI of Scotland became King James I of England. His name has become synonymous with the famous printing of the Bible that bears his name, the “King James Bible” of 1611 AD. He was one of the most intelligent Kings to reign over England, but his personal life made him the most controversial since his relative, King Henry VIII.

James VI of Scotland and James I of England

James VI of Scotland (June 19, 1566 – March 27, 1625, reigned July 24, 1567 – March 27, 1625) became James I of England and Ireland (reigned March 24, 1603-March 27, 1625) and was the first king of both England and Scotland. He also held the title of King of France, as had all his predecessors in the English throne since October 21, 1422, although by his time the title didn’t come with an active claim of this throne. James succeeded Elizabeth I as the closest living relative of the unmarried childless English monarch, through his descent from one of Henry VIII’s sisters.

King James Crowned at the Age of One

Prince James became King of Scotland on July 24, 1567, at the age of 13 months, after his mother Mary, Queen of Scots was forced to abdicate. Mary fled to England, where she was imprisoned for the next 19 years. His father, Lord Darnley, had died in mysterious circumstances shortly after James was born. James was formally crowned at the Church of the Holy Rood, Stirling on July 29, 1567. In accordance to the religious atmosphere of the time, he was brought up as a Scottish Presbyterian, though his mother had been a Roman Catholic.

King James – from Scotland to England

James inherited the throne of England after the death of his mother’s cousin, Queen Elizabeth I. James was never a very popular monarch among the people of England. He laid much of the groundwork that would eventually lead to the beheading of his heir Charles I during the English Civil War, but because of his political skills, his rule was relatively stable. James married Anne of Denmark by proxy on August 20, 1589, and in person on November 23, 1589 and again in person in January 21, 1590. They had eight children, of whom only three lived beyond infancy: Henry, Prince of Wales- (February 19, 1594 – November 6, 1612), Elizabeth Stuart – (August 19, 1596 – February 13, 1662), and King Charles I of England, Scotland and Ireland – (November 19, 1600 – January 30, 1649).

James dissolved the English Parliament on February 8, 1622, following a dispute involving parliamentary criticisms of a marriage proposed by James, of his son Charles to Princess Maria Anna of Spain. King James was quoted as saying, “Monarchy is the greatest thing on earth. Kings are rightly called gods since just like God they have power of life and death over all their subjects in all things. They are accountable to God only … so it is a crime for anyone to argue about what a king can do.“

King James is considered to have been one of the most intellectual and learned individuals ever to sit on any English or Scottish throne. He is primarily remembered for authorizing the production of the King James Version of the Bible, the highly popular English translation from Greek and Hebrew, which remains the most printed book in the history of the world, with over one billion copies in print. King James had nothing to do with the translating the Bible, he merely authorized it and provided financing for its production. Beyond that, however, James wrote several books himself.

One area of the life of King James that for many years remained clouded in controversy was allegations that James was homosexual. As James did father several children by Anne of Denmark, it is actually more accurate to say that he was allegedly a bi-sexual. While his close relationships with a number of men were noted, earlier historians questioned their sexual nature, however, few modern historians cast any doubt on the King’s bisexuality and the fact that his sexuality and choice of male partners both as King of Scotland then later in London as King of England were the subject of gossip from the city taverns to the Privy Council. His relationship as a teenager with fellow teenager Esmé Stuart, Earl of Lennox was criticized by Scottish Church leaders, who were part of a conspiracy to keep the young King and the young French courtier apart, as the relationship was improper to say the least. Lennox, facing threats of death, was forced to leave Scotland.

In the 1580s, King James openly kissed Francis Stewart Hepburn, Earl of Bothwell. Contemporary sources clearly hinted their relationship was a sexual one. When James inherited the English throne from Queen Elizabeth I in 1603, it was openly joked of the new English monarch in London that “Elizabeth was King: now James is Queen!” If there is still any doubt, it should be noted that George Villiers, also held an intimate relationship with King James, about which King James himself was quite open. King James called Villiers his “wife” and called himself Villiers’ “husband”! King James died in 1625 of gout and senility. He is buried in the Henry VII chapel in Westminster Abbey, with one of his favorite male suitors on his right, and another on his left.