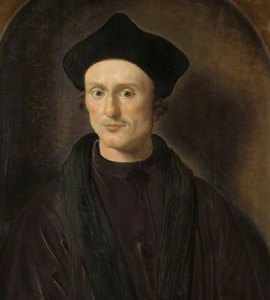 In 1496, John Colet, another Oxford professor and the son of the Mayor of London, started reading the New Testament in Greek and translating it into English for his students at Oxford, and later for the public at Saint Paul’s Cathedral in London. The people were so hungry to hear the Word of God in a language they could understand, that within six months there were 20,000 people packed in the church and at least that many outside trying to get in! (Sadly, while the enormous and beautiful Saint Paul’s Cathedral remains the main church in London today, as of 2003, typical Sunday morning worship attendance is only around 200 people… and most of them are tourist). Fortunately for Colet, he was a powerful man with friends in high places, so he amazingly managed to avoid execution.

He was educated at St Anthony’s school and at Magdalen College, Oxford, where he took the M.A. degree in 1490. He already held the nonresident rectory of Dennington, Suffolk, and the vicarage of St Dunstan’s, Stepney, and was now collated rector of Thurning, Hunts. In 1493 he went to Paris and thence to Italy, studying canon and civil law, patristics and the rudiments of Greek. During his residence abroad he became acquainted with Budaeus (Guillaume Budé) and Erasmus, and with the teaching of Savonarola.

Teachings and Positions of Colet

On his return to England in 1496 he took orders and settled at Oxford, where he lectured on the epistles of Saint Paul, replacing the old scholastic method of interpretation by an exegesis more in harmony with new learning. While the Roman Catholic Church taught that the teachings of Christ and Paul were very “mystical” and not to be interpreted by the “common man”… and that most Biblical teachings were “allegorical” and not be taken literally, Colet rejected this, and felt that the teachings of scripture could be made plain and easy-to-understand for the masses. Colet’s methods did much to influence Erasmus, who visited Oxford in 1498.

In 1502 he became prebendary of Salisbury, in 1505 prebendary of St Paul’s, and immediately afterwards dean of the same cathedral, having previously taken the degree of doctor of divinity. Here he continued his practice of lecturing on the books of the Bible; and he soon afterwards established a perpetual divinity lecture, on three days in each week, in St Paul’s church. About the year 1508, having inherited his father’s large wealth, Colet formed his plan for the re-foundation of St Paul’s School, which he completed in 1512. In 1514 Colet made the Canterbury pilgrimage, and in 1515 preached at Wolsey’s installation as cardinal. Colet also served as the Chaplain to King Henry VIII.

John Colet died of “the sweating sickness” on the 10th of September 1519. He was buried on the south side of the choir of St Paul’s church. A stone was laid over his grave, with no other inscription other than his name.

Colet and the Reformation

Colet, did not aspire to a formal breach with the Roman Church, but then, neither did most of the Reformers. Colet was a keen Reformer, who disapproved of priestly confession, and of the celibacy of the clergy. He was a powerful force in the England of his day, and helped materially to overcome the medieval conditions still common in England, and to introduce the humanist movement. Among his works are: Absoliaissimus de octo orationis partium constructione libellus (Antwerp, 1530), Rudimenta Grammatices (London, 1539), Daily Devotions, Monition to a Godly Life, Epistolae ad Erasmum, and commentaries on different parts of the Bible.

Strongly influenced by Thomas Linacre, who had just learned to read Greek after a two-year trip to Italy, Colet followed in his footsteps and went to Italy for two years to learn Greek. He later assisted Linacre in the production of the first Greek grammar book printed in England. Colet’s most significant contribution to the Reformation, was his bold reading the New Testament in Greek and translating it into English for his students at Oxford, which was strictly forbidden by the church. Later, Colet went even further by reading the scriptures in English for the public at Saint Paul’s Cathedral in London. The people were so hungry to hear the Word of God in a language they could understand,(not Latin), that within six months there were 20,000 people packed in the church and at least that many outside trying to get in! Fortunately for Colet, he was a powerful man with friends in high places, so he amazingly managed to avoid execution for this blatant violation of the church’s “Latin-only” policy. Colet demonstrated the public’s overwhelming reaction of hunger for the Gospel in English, adding tremendous fuel to the growing fire of the Reformation.