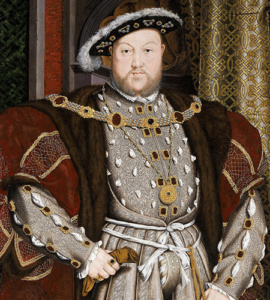 It was not that King Henry VIII had a change of conscience regarding publishing the Bible in English. His motives were more sinister… but the Lord sometimes uses the evil intentions of men to bring about His glory. King Henry VIII had in fact, requested that the Pope permit him to divorce his wife and marry his mistress. The Pope refused. King Henry responded by marrying his mistress anyway, (later having two of his many wives executed), and thumbing his nose at the Pope by renouncing Roman Catholicism, taking England out from under Rome’s religious control, and declaring himself as the reigning head of State to also be the new head of the Church. This new branch of the Christian Church, neither Roman Catholic nor truly Protestant, became known as the Anglican Church or the Church of England. King Henry acted essentially as its “Pope”. His first act was to further defy the wishes of Rome by funding the printing of the scriptures in English… the first legal English Bible… just for spite.

Henry – from Prince to King

Henry was created Prince of Wales after the death of his older brother Arthur, Prince of Wales. A dispensation from Pope Julius II was necessary in order to allow him to marry his brother’s widow Catherine of Aragon, and this was obtained on the basis of non-consummation. They contracted a marriage on June 11, 1509. Following difficulties with Rome over his divorce from Catherine (which was not sanctioned by the Pope, who was under pressure from Catherine’s nephew, Charles V at the time), Henry split from the Roman Catholic Church, seized many of the Church’s assets, and formed the Church of England. This became final with the passing of the Act of Supremacy 1536.

Henry VIII greatly improved English seapower and instituted an efficient navy. Throughout his life he was an avid gambler playing at dice, tables and cards. The other major achievement of Henry’s reign was the Act of Union of 1536, which effectively brought Wales under English government, with the result that the first Welsh members of parliament were elected in 1542. Henry was proud of his own Welsh blood. In 1533 Henry introduced the first legislation against homosexuals with the Buggery Act, making “buggery” punishable by hanging, a penalty not finally lifted until 1861.

The Many Wives of King Henry VIII

Henry is also famous for his six wives. While he was still legally married to Catherine of Aragon he married Anne Boleyn in secret on January 25, 1533 (his marriage to Catherine had to be annulled by a special act of Parliament on May 23 of the same year). Anne bore Henry a female child Elizabeth but she did not give him the male heir he so desperately wanted. For this reason he had his marriage with her annulled, had her executed on trumped up charges of adultery, and married Jane Seymour. Seymour gave Henry a male child, but she died shortly after doing so. The boy was sickly, and Henry reluctantly remarried, on the advice of his chancellor, Thomas Cromwell. Cromwell, like his predecessors, More and Wolsey, fell from favour and was charged with treason.

His fourth wife was the German Protestant Anne of Cleves. Henry disliked her from the beginning, and had their marriage annulled after only a few months. He proceeded to marry Catherine Howard, a young cousin of Anne Boleyn, who, like Anne, was found guilty of adultery and executed for treason. His last wife was Catherine Parr, a more mature woman who had been twice widowed. None of his last three queens bore him any children.

The Death and Children of King Henry VIII

It is well known that, in later life, King Henry VIII was grossly overweight, and possibly suffered from both gout and syphilis. In his younger days, however, he had been a very active man. His increased size dates from a jousting accident in 1536. He suffered a thigh wound which not only prevented him from taking exercise but which gradually became ulcerated and may have indirectly led to his death. Henry died in 1547 at Whitehall in London and was buried at Windsor. At his death King Henry VIII left three children, each of whom had a turn on the English throne: Edward VI, Mary I (“Bloody” Mary), and Elizabeth I.