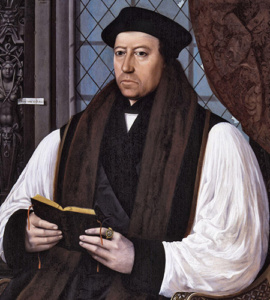 In 1539, Thomas Cranmer, the Archbishop of Canterbury, hired Myles Coverdale at the bequest of King Henry VIII to publish the “Great Bible”. It became the first English Bible authorized for public use, as it was distributed to every church, chained to the pulpit, and a reader was even provided so that the illiterate could hear the Word of God in plain English. It would seem that William Tyndale’s last wish had been granted…just three years after his martyrdom. Cranmer’s Bible, published by Coverdale, was known as the Great Bible due to its great size: a large pulpit folio measuring over 14 inches tall. Seven editions of this version were printed between April of 1539 and December of 1541.

Thomas Cranmer was born in 1489 at Nottingham. He was educated at Cambridge, and became a priest following the death of his first wife. Cranmer served as Archbishop of Canterbury during the reigns of the English kings Henry VIII and Edward VI.

The Early Years of Thomas Cranmer

Thomas Cranmer entered the ministry for a simple reason: his father only had enough land to give his eldest son, so Thomas and his younger brother – as poor members of the gentry – joined the clergy. Cranmer was given a fellowship at Jesus College, Cambridge in 1510, which he lost when he married the daughter of a local tavern-keeper. She died in childbirth, at which point he was re-accepted by the college and devoted himself to study. He took holy orders in 1523.

A plague forced Cranmer to leave Cambridge for Essex. Here, he came to the attention of King Henry VIII, who was staying nearby. The King found Cranmer a willing advocate for desired divorce from Catherine of Aragon. Cranmer argued the case as part of the embassy to Rome in 1530, and in 1532 became ambassador to Holy Roman Emperor Charles V.

Cranmer was sent to Germany to learn more about the Lutheran movement, where he met Andreas Osiander, a Lutheran reformer whose ideology appealed to him. Osiander’s niece also appealed to him, and Cranmer and the niece, Margaret, were married that year. Cranmer was becoming a Protestant… in the Kings Court!

On March 30, 1533, he became Archbishop of Canterbury, and forced (for a time) to hide his married state. Once his appointment was approved by the Pope, Cranmer declared King Henry’s marriage to Catherine void, and four months later married him to Anne Boleyn. In 1536 it was Anne Boleyn’s marriage that was declared invalid, then Anne of Cleves 1540, then Catherine Howard. As King Henry divorces his many wives, Cranmer continued to be warmly supported by King Henry.

The Church of England & The Book of Common Prayer

Thomas Cranmer carefully danced around the politics of his position, and was able to push through the reforms that led gradually to the creation of the Church of England. Under the reign of Edward VI, Cranmer was allowed to make the doctrinal changes he thought necessary to the church. In 1549 he helped complete the Book of Common Prayer, for which his contributions are well-known.

After Edward VI’s death, Thomas Cranmer supported Lady Jane Grey as successor. Her nine-day reign was followed by the Roman Catholic Queen “Bloody” Mary, who tried him for treason. After a long trial and imprisonment, he was forced to proclaim to the public his error in the support of Protestantism, an act designed to discourage followers of the religion.

The Death of Thomas Cranmer

However, at his execution on March 21, 1556, he withdrew his forced confession, and proclaimed the truth of the Protestant faith. He placed his hand in the fire, the hand with which he had falsely signed his renouncement of his beliefs, and said, “This hath offended!” With that gesture, the government’s hope of quelling the Protestant Reformation was lost.