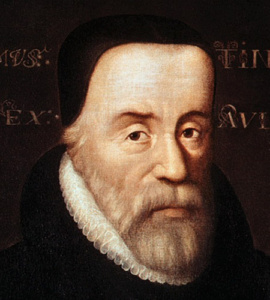 William Tyndale was the Captain of the Army of Reformers, and was their spiritual leader. Tyndale holds the distinction of being the first man to ever print the New Testament in the English language. Tyndale was a true scholar and a genius, so fluent in eight languages that it was said one would think any one of them to be his native tongue. He is frequently referred to as the “Architect of the English Language”, (even more so than William Shakespeare) as so many of the phrases Tyndale coined are still in our language today.

William Tyndale (1494-1536) Biblical translator and martyr; born most probably at North Nibley (15 miles south-west of Gloucester), England, in 1494; died at Vilvoorden (6 miles north-east of Brussels), Belgium, Oct. 6, 1536. Tyndale was descended from an ancient Northumbrian family, went to school at Oxford, and afterward to Magdalen Hall and Cambridge.

Tyndale was a theologian and scholar who translated the Bible into an early form of Modern English. He was the first person to take advantage of Gutenberg’s movable-type press for the purpose of printing the scriptures in the English language. Besides translating the Bible, Tyndale also held and published views which were considered heretical, first by the Catholic Church, and later by the Church of England which was established by Henry VIII. His Bible translation also included notes and commentary promoting these views. Tyndale’s translation was banned by the authorities, and Tyndale himself was burned at the stake in 1536, at the instigation of agents of Henry VIII and the Anglican Church.

The Early Years of William Tyndale

Tyndale enrolled at Oxford in 1505, and grew up at the University. He received his Master’s Degree in 1515 at the age of twenty-one! He proved to be a gifted linguist. One of Tyndale’s associates commented that Tyndale was “so skilled in eight languages – Hebrew, Greek, Latin, Spanish, French, Italian, English, and German, that whichever he speaks, you might think it his native tongue!” This gift undoubtedly aided him in his successful evasion of the authorities during his years of exile from England.

Around 1520, William Tyndale became a tutor in the family of Sir John Walsh, at Little Sodbury in Gloucestershire. Having become attached to the doctrines of the Reformation, and devoted himself to the study of the Scriptures, the open avowal of his sentiments in the house of Walsh, his disputes with Roman Catholic dignitaries there, and especially his preaching, excited much opposition, and led to his removal to London (about Oct., 1523), where he began to preach, and made many friends among the laity, but none among church leaders.

A clergyman hopelessly entrenched in Roman Catholic dogma once taunted Tyndale with the statement, “We are better to be without God’s laws than the Pope’s”. Tyndale was infuriated by such Roman Catholic heresies, and he replied, “I defy the Pope and all his laws. If God spare my life ere many years, I will cause the boy that drives the plow to know more of the scriptures than you!”

He was hospitably entertained at the house of Sir Humphrey Monmouth, and also financially aided by him and others in the accomplishment of his purpose to translate the Scriptures into the commonly spoken English of the day. Unable to do so in England, he set out for the continent (about May, 1524), and appears to have visited Hamburg and Wittenberg. The place where he translated the New Testament, is thought to have been Wittenberg, under the aid of Martin Luther. The printing of this English New Testament in quarto was begun at Cologne in the summer of 1525, and completed at Worms, and that there was likewise printed an octavo edition, both before the end of that year. William Tyndale’s Biblical translations appeared in the following order: New Testament, 1525-26; Pentateuch, 1530; Jonah, 1531.

His literary activity during that interval was extraordinary. When he left England, his knowledge of Hebrew, if he had any, was of the most rudimentary nature; and yet he mastered that difficult tongue so as to produce from the original an admirable translation of the entire Pentateuch, the Books of Joshua, Judges, Ruth, First and Second Samuel, First and Second Kings, First Chronicles, contained in Matthew’s Bible of 1537, and of the Book of Jonah, so excellent, indeed, that his work is not only the basis of those portions of the Authorized King James Version of 1611, but constitutes nine-tenths of that translation, and very largely that of the English Revised Version of 1885.

In addition to these he produced the following works. His first original composition, A Pathway into the Holy Scripture, is really a reprint, slightly altered, of his Prologue to the quarto edition of his New Testament, and had appeared in separate form before 1532; The Parable of the Wicked Mammon (1527); and The Obedience of a Christian Man (1527-28). These several works drew out in 1529 Sir Thomas More’s Dialogue, etc. In 1530 appeared Tyndale’s Practyse of Prelates, and in 1531 his Answer to the Dialogue, his Exposition of the First Epistle of St. John, and the famous Prologue to Jonah; in 1532, An Exposition upon the V. VI. VII. Chapters of Matthew; and in 1536, A Brief Declaration of the Sacraments, etc., which seems to be a posthumous publication. Joshua-Second Chronicles also was published after his death.

All these works were written during those mysterious years, in places of concealment so secure and well chosen, that neither the ecclesiastical nor diplomatic emissaries of Wolsey and Henry VIII., charged to track, hunt down, and seize the fugitive, were able to reach them, and they are even yet unknown. Under the idea that the progress of the Reformation in England rendered it safe for him to leave his concealment, he settled at Antwerp in 1534, and combined the work of an evangelist with that of a translator of the Bible.

The Betrayal and Death of William Tyndale

Tyndale was betrayed by a friend, Philips, the agent either of Henry or of English ecclesiastics, or possibly of both. Tyndale was arrested and imprisoned in the castle of Vilvoorden for over 500 days of horrible conditions. He was tried for heresy and treason in a ridiculously unfair trial, and convicted. Tyndale was then strangled and burnt at the stake in the prison yard, Oct. 6, 1536. His last words were, “Lord, open the king of England’s eyes.” This prayer was answered three years later, in the publication of King Henry VIII’s 1539 English “Great Bible”.

Tyndale’s place in history has not yet been sufficiently recognized as a translator of the Scriptures, as an apostle of liberty, and as a chief promoter of the Reformation in England. In all these respects his influence has been singularly under-valued. The sweeping statement found in almost all histories, that Tyndale translated from the Vulgate and Luther, is most damaging to the reputation of the writers who make it; for, as a matter of fact, it is contrary to truth, since his translations are made directly from the originals, with the aid of the Erasmus 1516 Greek-Latin New Testament, and the best available Hebrew texts. The Prolegomena in Mombert’s William Tyndale’s Five Books of Moses show conclusively that Tyndale’s Pentateuch is a translation of the Hebrew original.