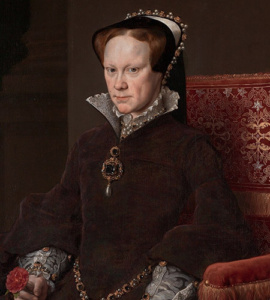 The ebb and flow of freedom continued through the 1540’s…and into the 1550’s. After King Henry VIII, King Edward VI took the throne, and after his death, the reign of Queen “Bloody” Mary was the next obstacle to the printing of the Bible in English. She was possessed in her quest to return England to the Roman Church. In 1555, John “Thomas Matthew” Rogers and Thomas Cranmer were both burned at the stake. Mary went on to burn reformers at the stake by the hundreds for the “crime” of being a Protestant. This era was known as the Marian Exile, and the refugees fled from England with little hope of ever seeing their home or friends again. During their exile, they produced the famous 1560 Geneva Bible which was “The Bible of the Protestant Reformation”, from which many home-schooled their children.

Queen Mary I of England was born February 18, 1516, the daughter of King Henry VIII and his first of six wives, Catherine of Aragon. Mary was the only child from that union to survive infancy. She reigned as Queen of England from July 19, 1553 until her death on November 17, 1558.

The Early Years of Queen Mary I

Queen Mary I was alienated from her father, King Henry VIII, during his divorce (it was not a divorce in the modern sense, but an annulment) from her mother. As her parents’ marriage was deemed null and void, Mary was then deemed illegitimate and thus deprived for a time of her status as an heir to the throne. This fueled her rage regarding her father’s break from the Roman Catholic Church, which had previously instructed him that he could not divorce from her mother. Mary felt that if her father, King Henry VIII, had obeyed the Roman Catholic Church, she would not be seen as “illegitimate, and her right to the throne would not have been questioned. This is the foundation upon which her loyalty to Rome was laid. By the time of King Henry VIII’s death, however, she had been restored as second in line to the throne, after her half-brother Edward, who was physically weak.

Queen Mary I Takes the Throne of England

It was not until 1553 that Edward died, however, by which time Protestantism had gained such ground that a rival claimant to the throne was put forward, Mary’s cousin Lady Jane Grey. Public sympathy remained with Mary, and she soon overcame resistance to her accession. By July 19 Jane Grey had been deposed and Mary was the undisputed Queen. Her official coronation came on November 30, 1553 . Mary first began to earn her unofficial title of “Bloody Mary” when she had her cousin, Lady Jane Grey, executed to prevent any possible power struggle. It is generally believed that Mary might have spared Jane’s life if it had not been for the intervention of the Spanish diplomats who conditioned Mary’s marriage to their king on her executing Jane.

Mary had always rejected and resented the break with Rome that her father had instituted and his subsequent establishment of the Anglican Church that had flowed from her half-brother’s protestantism, and now she tried to turn England back to Roman Catholicism. This effort was carried out by force, and hundreds of Protestant leaders were executed. The first was John Rogers (a.k.a. “Thomas Matthews”), the printer of the “Matthews-Tyndale Bible”. His execution was followed by the execution of former Archbishop of Canterbury, Thomas Cranmer, who was primarily responsible for the printing of the “Great Bible”. Hundreds more would follow in Mary’s bloody reign of terror. This earned the queen the title of “Bloody Mary”.

Her restoration of Catholicism was remarkable in some ways: Where only one bishop, John Fisher of Rochester, had resisted King Henry VIII’s rejection of Roman catholicism to the point that Henry had him executed; most of Mary’s bishops were more loyal and refused to conform to the restored Protestantism under Elizabeth I, and they died under house arrest.

Mary’s allegiance to Roman Catholicism inspired her to institute social reforms, but these were largely unsuccessful. Her marriage to Philip II of Spain, in 1554, was unpopular even with her Catholic subjects. Philip spent very little time with Mary, once he realized that she was not able to bear a child. Mary died at the age of 42 from uterine or ovarian cancer. She was succeeded by her half-sister Elizabeth I, who quickly undid many of Mary’s changes, and returned England to its former Protestant-friendly environment. This enabled the English refugees who had fled England to ever-neutral Geneva, Switzerland to print the “Geneva Bible”, to eventually come home and begin printing the Protestant Geneva Bible in England.

Mary I of England is often confused with her cousin “Mary, Queen of Scots”, who lived at the same time. Many scholars trace the nursery rhyme “Mary, Mary, quite contrary… how does your garden grow… with silver bells and cockle shells and pretty maids all in a row” to Mary’s unpopular attempts to bring Roman Catholicism back to England, identifying the “cockle shells”, for example, with the symbol of pilgrimage to the Catholic Shrine of St. James in Spain and the “pretty maids all in a row” with Catholic nuns.